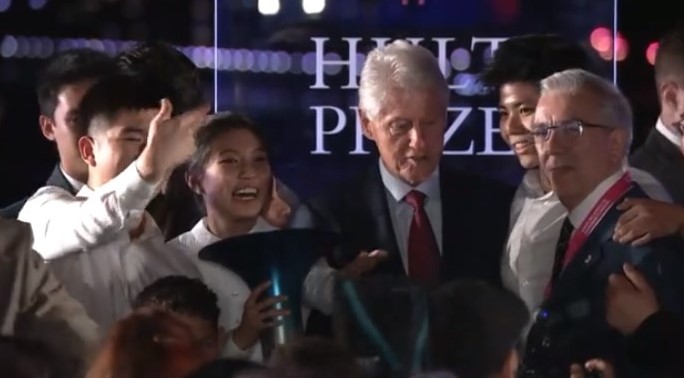 Hear from Dr Evangelos Markopoulos, last year’s Hult Prize winning coach and lead academic for the competition at Queen Mary on why he is passionate about student entrepreneurship and its roles for social good.

Academics and students co-exist in higher education institutions attempting to change the world with knowledge and experiences in respect to the society, the economy and humanity.

I strongly believe that we, as teachers above all, and then as academics, are obliged to honour our institution and our students by providing them with life experiences beyond academic knowledge and educational excellence.   One such experience is the HULT Prize which I introduced at Queen Mary when I joined the institution.

The Hult Prize is the world’s largest student competition for social good. It is considered the Nobel Prize for student entrepreneurship. Each year, the former US President Bill Clinton announces at the UN a Hult Prize challenge aligned with the UN sustainable goals, inspiring and enabling the world’s brightest minds to solve its greatest problems.

The competition in which universities from more than 100 countries participate in several rounds, culminates with teams presenting their idea at the United Nations (UN) for the $1 Million prize in front of former US President Bill Clinton and highly significant personalities, leaders and intellectuals.

The 2017 challenge was to harness the power of energy to transform the lives of 10 million people by 2025. With the full support of the School of Business Management (SBM), I organized the 2017 QMUL In-campus competition, registering, coaching and mentoring 11 teams (44 students). The winning team, ‘Natura4’, advanced at the European Finals which took place in London on March 2018 and received the 2nd place.   The runner up, team ‘Rainbow’, received a wildcard ticket and competed at the North American Finals at San Francisco where they received honouring comments from the judges.  The tremendous support and recognition from the institution and the attention and support of our Principal Professor Colin Bailey was a contributing factor to the teams success.

This year the 2019 challenge is to develop a venture that will create 10,000 meaningful jobs for the youth in 10 years. Again, with the support of SBM and a wonderful team of volunteers, we organized again the In campus competition with 16 registered teams (76 students).  I coached them all with weekly workshops for all, and one-to-one mentoring sessions.  This year the winning team, ‘ET Collect’, will compete at European Regionals at Oslo, and the runner up team, ‘Consciously Aware’, received an honouring wildcard ticket to compete at the Far East Regionals at Tokyo.