Exit from the City is manageable – Forbes Cyprus

28 Feb Exit from the City is manageable – Forbes Cyprus 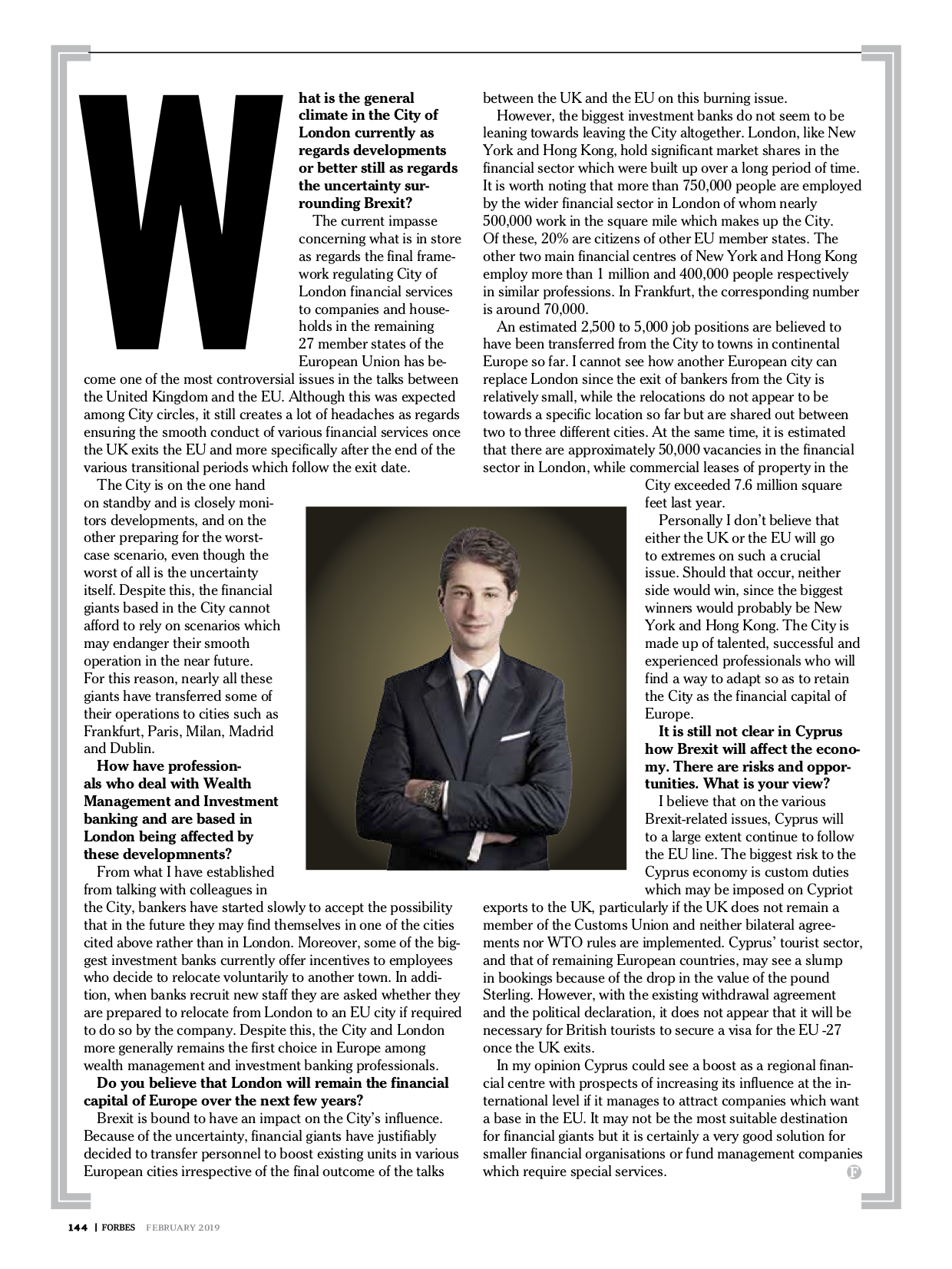 EXIT FROM THE CITY IS MANAGEABLE

WE ASKED SOMEONE WHO LIVES IN THE CITY OF LONDON TO GIVE US INSIGHT INTO EUROPE’S BIGGEST FINANCIAL CENTRE AMIDST UNCERTAINTY OVER THE TERMS OF BRITAIN’S EXIT FROM THE EUROPEAN UNION. WE SPOKE TO LOUIS LOIZOU, PARTNER AT LOIZOU & CO AND PRESIDENT OF THE HELLENIC BANKERS ASSOCIATION UK. HE SAYS THAT THERE IS SOME CONCERN BUT THIS IS NOT SO MUCH DUE TO BREXIT ITSELF BUT MAINLY TO THE UNCERTAINTY AS TO THE FINAL TERMS OF THE AGREEMENT BETWEEN THE UNITED KINGDOM AND THE EU.

What is the general climate in the City of London currently as regards developments or better still as regards the uncertainty surrounding Brexit?

The current impasse concerning what is in store as regards the final framework regulating City of London financial services to companies and households in the remaining 27 member states of the European Union has become one of the most controversial issues in the talks between the United Kingdom and the EU. Although this was expected among City circles, it still creates a lot of headaches as regards ensuring the smooth conduct of various financial services once the UK exits the EU and more specifically after the end of the various transitional periods which follow the exit date. The City is on the one hand on standby and is closely monitoring developments, and on the other preparing for the worst case scenario, even though the worst of all is the uncertainty itself. Despite this, the financial giants based in the City cannot afford to rely on scenarios which may endanger their smooth operation in the near future. For this reason, nearly all these giants have transferred some of their operations to cities such as Frankfurt, Paris, Milan, Madrid and Dublin.

How have professionals who deal with Wealth Management and Investment banking and are based in London being affected by these developments?

From what I have established from talking with colleagues in the City, bankers have started slowly to accept the possibility that in the future they may find themselves in one of the cities cited above rather than in London. Moreover, some of the biggest investment banks currently offer incentives to employees who decide to relocate voluntarily to another town. In addition, when banks recruit new staff they are asked whether they are prepared to relocate from London to an EU city if required to do so by the company. Despite this, the City and London more generally remain the first choice in Europe among wealth management and investment banking professionals.

Do you believe that London will remain the financial capital of Europe over the next few years?

Brexit is bound to have an impact on the City’s influence. Because of the uncertainty, financial giants have justifiably decided to transfer personnel to boost existing units in various European cities irrespective of the final outcome of the talks between the UK and the EU on this burning issue. However, the biggest investment banks do not seem to be leaning towards leaving the City altogether. London, like New York and Hong Kong, hold significant market shares in the financial sector which were built up over a long period of time. It is worth noting that more than 750,000 people are employed by the wider financial sector in London of whom nearly 500,000 work in the square mile which makes up the City. Of these, 20% are citizens of other EU member states. The other two main financial centres of New York and Hong Kong employ more than 1 million and 400,000 people respectively in similar professions. In Frankfurt, the corresponding number is around 70,000. An estimated 2,500 to 5,000 job positions are believed to have been transferred from the City to towns in continental Europe so far. I cannot see how another European city can replace London since the exit of bankers from the City is relatively small, while the relocations do not appear to be towards a specific location so far but are shared out between two to three different cities. At the same time, it is estimated that there are approximately 50,000 vacancies in the financial sector in London, while commercial leases of property in the City exceeded 7.6 million square feet last year. Personally I don’t believe that either the UK or the EU will go to extremes on such a crucial issue. Should that occur, neither side would win, since the biggest winners would probably be New York and Hong Kong. The City is made up of talented, successful and experienced professionals who will find a way to adapt so as to retain the City as the financial capital of Europe.

It is still not clear in Cyprus how Brexit will affect the economy. There are risks and opportunities. What is your view?

I believe that on the various Brexit-related issues, Cyprus will to a large extent continue to follow the EU line. The biggest risk to the Cyprus economy is custom duties which may be imposed on Cypriot exports to the UK, particularly if the UK does not remain a member of the Customs Union and neither bilateral agreements nor WTO rules are implemented. Cyprus’ tourist sector, and that of remaining European countries, may see a slump in bookings because of the drop in the value of the pound Sterling. However, with the existing withdrawal agreement and the political declaration, it does not appear that it will be necessary for British tourists to secure a visa for the EU-27 once the UK exits. In my opinion Cyprus could see a boost as a regional financial centre with prospects of increasing its influence at the international level if it manages to attract companies which want a base in the EU. It may not be the most suitable destination for financial giants but it is certainly a very good solution for smaller financial organisations or fund management companies which require special services.