What Skills Should an Aspiring Founder Prioritize? 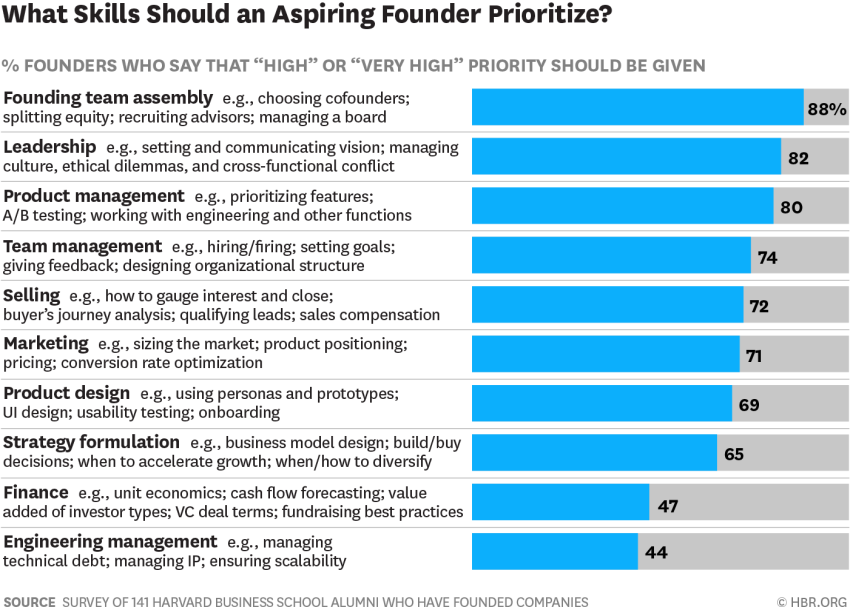 28 Apr What Skills Should an Aspiring Founder Prioritize?

Posted at 11:20h in Uncategorized by adminstage
0 Likes

Alice, an outstanding 24-year-old engineer working for a top technology company, wants to launch her own startup within the next five years, but she doesn’t yet have a venture concept. What knowledge and skills does Alice need to lead a technology venture? And what’s the best way to acquire that know-how? Should Alice go to graduate school, or keep learning on the job?

We recently posed these questions to Harvard Business School alumni founders while designing a new two-year joint degree program that confers both a master of science from Harvard’s Paulson School of Engineering and Applied Sciences and an MBA from HBS. What we wanted to hear from current leaders of technology ventures was: What does someone who aspires to your role need to know?

We got input from 141 HBS alumni founders, most of whom lead venture capital–backed technology startups. Respondents’ median years of full-time work experience and founder experience were 17 and 7, respectively. Forty-nine percent of respondents had STEM undergraduate degrees.

The survey results show that no single management skill stands out above the rest. Respondents indicated that founders need to be management jacks-of-all-trades, so to speak. For eight out of 10 skill areas that we listed, at least 65% of respondents said that an aspiring founder should give high or very high priority to acquiring skills in that domain. As one respondent said, “Every one of these skills is important. The question is: For which skills will the CEO build deep personal expertise, and which will they outsource to other founding team members?”

Could these findings be skewed by the fact that we surveyed MBA alumni? With that in mind, we posed the same questions to 20 non-MBA founders of technology startups. The second sample’s small size meant that comparisons were suggestive rather than statistically significant, but the survey responses of non-MBA founders were quite similar to those of MBA alumni founders. The non-MBA founders shared the view that it is very important for future leaders of technology ventures to build a wide range of management skills.

In the survey, we asked respondents to explain their assessments and whether we’d failed to list any important abilities. Several themes emerged.

Skill requirements depend on the stage of the startup. Respondents emphasized that the skills required by a founder change as their venture matures. The skills most frequently mentioned as crucial during early stages include product design and development, pitching, and assembling a founding team. In later-stage ventures, important skills include recruiting specialist employees, communicating vision to new employees, and managing company culture.

Cofounders are crucial. Respondents rated assembling a founding team as the highest-priority skill for a future technology venture leader. One commented, “No 24-year-old engineer can acquire all of these skills in five years. So, the crucial skill is learning how to form a founding team that can cover the gaps. A founder must be able to assess their own strengths and weaknesses and know how to recruit and motivate complementary founding team members.” Another added, “If you don’t get decisions about potential cofounders right — for example, if your cofounder is not fully committed — it will likely kill your company.”

Founders must prioritize and be able to take feedback. Respondents cited the need for founders of technology startups to have other leadership skills, in particular: (1) openness to receiving feedback without being defensive; and (2) the ability to prioritize, including knowing what to delegate and what to do yourself. With respect to prioritization, one respondent noted, “Too many startup CEOs are easily distracted, especially technically adept founders who can see the next cool thing.”

Customer discovery and user-centered product design skills are paramount. Many respondents stressed that, during a startup’s early stages, its founders must gain a deep understanding of customer needs, and then must build on that understanding through rapid iteration and testing to prove product-market fit. As one respondent said, “Nothing else matters if you are building a product that no one wants.” Highlighting the importance of customer discovery research and lean experimentation, another noted, “Tech founders, sure that they already know what to build, are too often dismissive when told they should talk to customers.”

Always be closing? Respondents viewed selling as a crucial skill for founders, and noted that this encompassed more than just product sales. One said, “Having studied engineering in college, selling was the number one skill set that I was missing when I launched a company. As a founder, you are always selling: first to yourself and maybe a significant other, and then to potential cofounders, employees, customers, strategic partners, and investors.” Another added, “I was surprised how critical it is for a startup CEO to be great storyteller. Being able to craft and communicate a compelling story about why you are doing what you’re doing can inspire others to join you and fund you.”

Negotiations are never-ending. Respondents pointed out that negotiating was missing from the list of skills we asked about. One commented, “As with selling, a founder is constantly negotiating. Selecting the right partners and then structuring win-win deals with them is a vital skill — one that our aspiring founder didn’t learn in college engineering courses.”

Finance is less important. Finance received the second lowest priority score of the 10 skills areas. As one respondent explained, “It’s easy to figure out unit economics, or you can hire someone to do it.” However, a few respondents made a strong case for learning about finance. One said, “Most technical founders don’t have a clue about how venture finance works, and as a result they can get screwed by VCs.” Another added, “Entrepreneurs need to know that fundraising can be brutally difficult — that deals can fall apart after months of conversations. Likewise, they need to understand tradeoffs with raising funds at a high valuation.”

An entrepreneurial mindset is essential, if hard to define. Commenting on what was missing from our survey, many respondents said that aspiring founders need an entrepreneurial mindset. Persistence and grit were frequently cited as prerequisites for success, as was scrappiness, which one respondent described as “doing the impossible with little in the way of resources.” Another mentioned “flexibility, accountability, and a drive to get things done” as essential attributes. A respondent added, “This is all theory until you do it. But it’s key to gain the confidence that you can do it. That can come from case studies, meeting role models, learning-by-doing on course projects, and seeing peers take the plunge.”

What about graduate school? Having explored respondents’ views about what future leaders of technology ventures need to know, we then asked them whether an outstanding 24-year-old engineer and aspiring founder like Alice should acquire that know-how by enrolling in graduate school or through further on-the-job training. Forty-four percent of our MBA respondents said they were likely or very likely to recommend a traditional two-year MBA program. Fifty-eight percent were likely or very likely to recommend a two-year MS/MBA program that blends engineering, design, and management training and entails some additional coursework, as compared with a traditional MBA. Finally, 34% were likely or very likely to advise a young engineer to pursue further on-the-job training.

One thing we hoped to learn from this exercise was just how long a program aimed at future technology venture founders should be. Our initial hypothesis was that aspiring founders, impatient to launch their ventures, might wish to complete graduate school as quickly as possible. Instead, we came away convinced that founders need a wide breadth of management and leadership skills to succeed in their ventures. Whether they choose to learn those skills in the classroom or on the job, successful founders need broad mastery of management skills. Extreme aptitude in one area alone, like engineering, will not suffice.

Source: What Does an Aspiring Founder Need to Know?